The thermostability and density of water-salt solutions of DNA, irradiated by non thermal coherent millimeter electromagnetic waves with frequency 64.5 GHz have been investigated using the methods of spectrophotometry and densitometry. It is shown that the thermostability of DNA and density of its solutions are increased, depending on time of irradiation. It is expected that under the influence of millimeter electromagnetic radiation the hydration of DNA and ions of Na+ that are present in solution decrease. As a result, the physicochemical characteristics of DNA are changed.

At present, the low-power electromagnetic millimeter waves (MMWs) are widely used in biology, medicine, radio- and telecommunications, in various electronic devices. For example, during last years the MMWs were used along with anticancer drugs in the chemotherapy of tumor of the laboratory animals. The experiments proved that without reducing the efiect of anticancer drugs, it became possible to reduce adverse toxic reaction of the organism to the drugs. However, the mechanisms of low-intensity MMWs action on biological object still remain unclear [5, 6, 8].

Currently, the concept that non-thermal efiect of MMWs on biological systems is determined by the efiect of MMWs on water, causing changes of bound water properties is rather acknowledged. It is known that electromagnetic radiation of extremely high frequensies (EHF) of 30{300 GHz barely penetrates living organisms and biological tissues. The EHF electromagnetic radiation is nonionizing. The energy of quanta of low-power (non-thermal) EHF radiation is less than the energy of heat motion of atoms and moleculs and appreciably less than the energy of hydrogen bonds in living organisms.

Numerous efiects of in°uence of low intensity extra high frequency electromagnetic radiation on the level of human organism and animals, bacteria, as well as on prokaryotic and eukaryotic cells are revealed [9, 13]. The existence of selective frequency dependent efiects of MMWs has been shown along with occurrence of non selective, frequency independent in°uence [6, 11]. At present, the concept that non- thermal in°uence of MMWs on biosystems is being mediated by in°uence of water has got conflrmation [7, 11]. Thus, the research of in°uence MMWs on structure and physical and chemical properties of water and water solutions of biological objects is essential. It is shown that rather weak physical in°uence including the MM-waves, impacts the properties of water solutions due to change of structure of water in an environment of the dissolved substances. Moreover, it is revealed, that functional changes of biological objects occur at irradiation of solutions of MM-waves [12].

At present, the animal and plant life is constantly being subjected to the low intensity microwave radiation (mobile phones, antennas, space communication, household appliances, etc). At the same time, the resonance frequencies of oscillations of molecular structures of biological tissues and molecular structures of water are in that frequency range too. Therefore, during their vital activity, the living organisms are constantly subjected to those electromagnetic flelds in°uences and investigating the efiect of electromagnetic waves of that range on water and biological systems could prove useful in developing certain mechanisms of protection from them.

The purpose of the work is to investigate the physical properties of DNA solutions irradiated by low-energy coherent electromagnetic MMWs with frequency of 64.5 GHz, in correspondence with resonance frequency of oscillations of hexagonal structures of water [11].

Maxima of absorption of DNA at melting are received on spec-trophotometer PYE UNICAM-SP8-100 (England), in thermostatic cells. At DNA melting quartz cuvettes hermetically closed by te°on corks, by length of an optical way 1 cm were used. Melting of DNA was carried out at continuous heating DNA solutions with help of pro-grammed device Temperature Controller SP 876 (England), with a speed of 0.25 grade/minutes. Measurements were carried out in an in-terval of change of temperature 25–C • T • 95–C. Values of absorption were deduced on the monitor of micro calculator Hewlett Packard 97S I/O. Melting of each sample of DNA repeated 6 times. Melting curves were constructed as it is described in work [14]. Melting parameters | Temperature Tm and width of melting interval ¢T of each DNA were averaged on six measurements.

On the basis of the normalized integral melting curves the method of numerical difierentiation receives difierential melting curves (DMC) as it is described in work [3]. Density of water, 0.1 £ SSC and DNA solutions with sensitivity was determined on dencitometer DMA 4500 Anton Paar (USA), with resolutions 10¡5 g/cm3.

The irradiation of solutions by MM-waves was carried out in a special glass bulb. Solutions from above are closed by transparent flne chlorvinil membranula for radiation. Thickness of the irradiated sample did not exceed 1 mm. For irradiation of MMWs source of extra high frequencies was applied, generator G4-142 (Russian made), working on the basis of a back wave lamp. On an output of the generator there was a cone-shaped radiating antenna. Stability of frequency of the generator was §0.05%. The irradiation of samples was carried out at room temperature, in a mode of amplitude modulation of frequency of 1 Hz, incident power density on a sample at frequency of 64.5 GHz was » 50 „W/cm2, the sample was placed in the far zone of antenna.

The research was conducted on the exposure of MMWs on the thermostability of DNA, purifled from the liver of healthy rats (h-DNA) and Sarcoma tumor 45 (S-45) in water solutions. The irradiation of the samples was carried out at room temperature, the power °ux density at frequency of 64.5 GHz was » 50 microwatt/cm2. The DNA water solutions, prepared for spectrophotometer measurements, have been irradiated for 30, 40, 60, 90, 120 min. respectively. The melting curves have been obtained both, just after irradi curve of melting, magnitudes of Tm and ¢T do not depend on the storing time of the irradiated DNA. 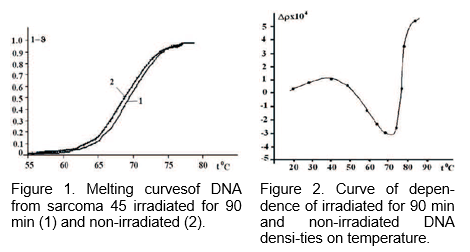 Figure 1 shows melting curves of (1) irradiated during 90 min., and (2) non-irradiated S-45 DNA and h-DNA respectively. Depending on the time of irradiation the thermostability of DNA is being increased, and this is more obvious for S-45 DNA (Figure 1).

Upon irradiation of 90 min. the Tm of a solution of hDNA is being increased up to » 1–C and Tm of S-45 DNA approximately up to 1.5–C; while the changes of ¢T remain within experimental errors (¢T is being slowly decreased as a result of irradiation). The data on Tm and ¢T of DNA from the liver of healthy rats and S-45, without treatment as well as irradiated during 90 minutes is shown in Table 1 [2].

The changes in values of radiated and non-radiated DNA’s densities are summarized in Table 2.

Usually, upon research of in°uence of difierent factors on base pairs of DNA, it is necessary to study the in°uence of the external factor on DNA from difierent sources with difierent GC content. In a number of cases these difierences may be insigniflcant and are within experimental uncertainty.

To avoid systematic errors, one may consider the in°uence of the studied factor with difierent GC content on the certain parts of the same DNA, and only after that one may guess about electoral influence of the given factor.

On the DMC of DNA each gauss can be presented as determined parts of DNA with an average GC-content. Thus, upon the research of the behavior of these parts under the in°uence of studied factors, based on the received data, one may consider the selective efiect on AT and GC-nucleotide pairs of DNA. As a result of a large overlapping the maximums of flrst two components as per temperature scale (T ) cannot be determined. That is why even insigniflcant change of DMC (within experimental errors) can lead to the dissolution with maximums under other temperatures. The divided third, fourth and flfth components can be used as parts with quasi-random distribution of nucleotide pairs with an average GC-content. One may get the average of GC-content (x) of the given part of DNA by using the following formula

and taking into consideration melting temperature (Tm) of the components. The calculations prove that for the mentioned peaks the average GC-content is equal accordingly to:

The method of dissolution of the DMC DNA is used to determine exposure of MMWs of low rate on the base pairs of DNA. It was proved that the exposure of MMWs on DNA leads to the stability of DNA. The MMWs of 64.5 GHz have been absorbed into water, as a result of which the hydration of nucleotide pairs has been changed. Figure 4 shows dependence of studied components T on the time of irradiation. As seen from the Figure 4.

T increases, which is more for AT-rich blocks. Consequently, by changing the structure of bound water the MMWs can difierently afiect the changes of thermostability of AT- and GC-nucleotide pairs. 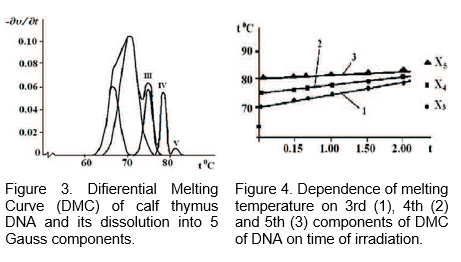 By summarizing the above mentioned data one may assume that MMWs selectively afiects nucleotide pairs. The proposed approach has certain advantages compared with other methods, since it does not require experimenting with DNA of difierent GC content. Just upon the direct experiment of DNA of the given organism it is possible to estimate the contribution of this or that factor to the changes of thermostability of difierent nucleotide pairs.

On the bases of obtained results following conclusions were made:

It has been obtained that melting temperature of AT-rich blocks of irradiated DNA | increases more than for GC-blocks. Consequently, by changing the structure of bound water the MMWs can difierently afiect the changes of thermostability of AT- and GC-nucleotide pairs.